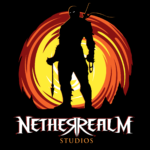 NetherRealm Studios, a video game developer, is a subsidiary of Warner Bros. Interactive Entertainment, founded in 2010 and based in Chicago, Illinois, United States. It included assets of former WB Games Chicago, Midway Games, and Surreal Software, which resulted in ownership to the rights to the Mortal Kombat, The Suffering, Spy Hunter, Joust, and Wheelman series. The first game by NetherRealm’s was the ninth installment and the reboot of the Mortal Kombat series.